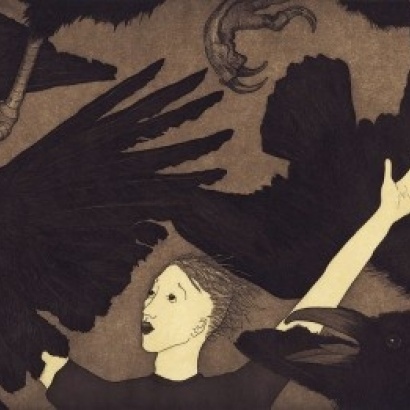 “Everyone has creativity inside them.”

This is Audrey Niffenegger's response to fellow writer Jeanette Winterson's query about what creativity means, at the opening of their converation during Manchester Literature Festival. To Niffenegger, it is freedom; the ability to do what you are curious about. She believes creativity comes in many different formats, including that of the everyday, despite people often thinking they are 'doing it wrong'. There is no wrong way to be creative and we shouldn't grow out of the wonder we have as children.

Niffenegger is an incredibly creative individual, clearly demonstrated by her work. The Raven Girl, her new 'picture book for adults' uses a technique called Aquatint, meaning she could spend a whole week on each illustration, sometimes doing 18-hour days. If you think this seems fanciful, search online for Niffenegger speaking about the process and examine the textured qualities of the results.

Her influences include Aubrey Beardsley and Charlotte Solomon. The latter references music alongside her artwork and Niffenegger has memories of visiting the Jewish Museum listening to music and viewing the images created. Music, she argues, is different from other forms by being more ephemeral and emotional. Niffenegger feels she has her own personal soundtrack in life, which perhaps explains why she is currently working on an opera for The Raven Girl.

Writing, in comparison, is quicker and Niffenegger jokes that if The Time Traveler's Wife was illustrated it would be three times as thick and not yet finished. On the topic of her first novel she admits to having never seen the film. This is deliberate because it allows her to imagine the film in whichever way viewers describe it, keeping open the possibility that the story itself will work in the linear time of cinema, unlike the non-chronological novel.

Niffenegger wrote this book based on the title alone and imagined the character as an old woman waiting. She knew this was the last scene and rather than create an image based on it she turned to writing. She also revealed that there are plans for a sequel to The Time Traveler's Wife, but it isn't due until 2018.

Winterson's opening question to Niffenegger was focused on identity. The curious circumstance of two articulated skeletons – 'Cecil' and 'Nigel' – that flank Nifenegger's drawing table. It seems they were acquired from other artists, and all she knows is that they are elderly men from India. However, Nifenegger's current novel-in-progress, The Chinchilla Girl in Exile, also examines identity and the story about a character with hypertrichosis (excess hair) explores what it means to be different and the affect this has on identity.

What the evening allows us to realise about Audrey Niffenegger is that not only does she have an incredible work ethic fuelled by her enjoyment of creativity, but as a result, we are able to enjoy it with her.

About the writer: Cat Lumb is an aspiring author, struggling writer and intrepid blogger. She is currently attempting to edit her first novel and plans to write another during the November challenge of NaNoWriMo! You can follow her writing journey at catlumb.com or via Twitter @Cat_Lumb

(Image from The Raven Girl by Audrey Niffenegger)